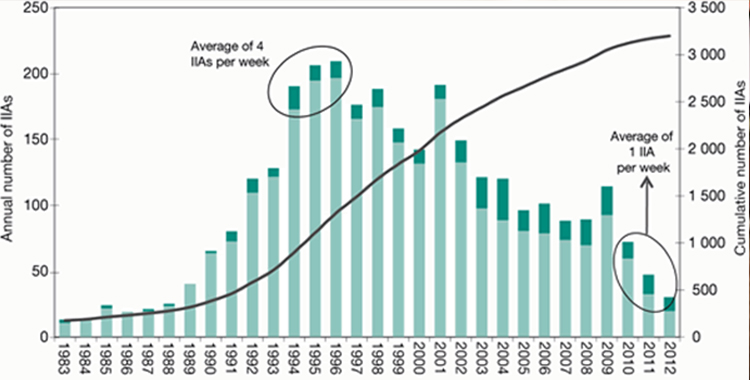 Investors generally face risks because of market price changes, reliability and fairness in property rights. Investors complain that rules are unfair and not fixed. The host countries also worry that investors will reap most gains and flee at the first sight of trouble, hence the distrust on both parties lead to little or no investment even if it benefits both parties.
In recent years, Bilateral Investment Treaties (BITs) have aided the growth of investment in low and middle-income countries by binding the host country to treat all foreign investors from the home country in ways that will protect their investment. BITs have become very popular and their popularity show that investors are not confident about the legal and political environment in low and middle-income countries.[1]
BITs provide enforceable rules to protect foreign investment and reduce the risk faced by investors. According to the United Nation Commission on Trade and Development’s (UNCTAD) overview of BITs, the BITs promote FDI through strategies, including guarantees of a high standard of treatment, legal protection of investment in international law and access to international dispute resolution.[2]
BITs have become very common in recent times in West Africa. A lot more BITs are being executed between West African Countries and other nations, mostly more developed countries. For the purposes of this paper, we will describe the countries which seek to receive the investments as “Host States” and refer to the investment exporting countries as “Investor States”.
There are 15 countries within the West African sub-region. Because the author lives and works in Ghana and can easily verify data involving Ghana, this paper concentrates on using Ghana’s experience in BITs as the basis for its analysis.

There are numerous reasons why countries will insist on executing BITs. Generally, all preambles to BITs contain the provision that among others, the chief aim of the BIT is to protect the investment from the Investor States.
To further appreciate why Investor States request for BITs, we will look at some of the salient features of all BITs.

These clauses put the responsibility on Host States to ensure the physical protection of the assets belonging to the Investor from the unlawful activities of persons under the control of the Host State.

These clauses ensure the right of the Investors to transfer all of the capital and profits from their investments back to the Investor State or any other place of their choice.  The economies of a number of West African Countries have been affected by sudden withdrawal of huge capital from their economy by Investor States who justify their actions under this clause.

Expropriation clauses have been considered one of the most important clauses in BITs. For the most part, these clauses provide Investors with protection of their investments from takeovers by the Host State, either directly or indirectly, without the payment of adequate compensation. The award of compensation for expropriation is the key requirement in such provisions and although this is always included in most BITs, the issue of what amount of compensation is to be paid to Investors for expropriation is one that often arises in arbitration.

Perhaps, treated as the most important clause in a BIT, the Investor State ensures that any dispute arising from or connected to the investment is settled outside of the courts of the Host State. This is often borne of mistrust for the existing structures within the Host State for the enforcement of relevant laws. This provision ensures that that judicial systems in Host States is denied the opportunity to gain wealth of knowledge and experience which comes with arbitrating or litigating investment related disputes.

There is an old age debate as to whether or not the execution of BITs has any positive impact on the socio-economic development of Host states.
Starting in the period 1970-74 with an amount of US$26.7 million, the average Foreign Direct Investment (FDI) inflows in the Western Africa sub-region rose to US$40.1 million in the period 1975-79 before shrinking to US$26.9 million in the early 1980s. From the period 1985-89, FDI inflows steadily increased and reached the amount of US$613 million, an amount however lower than the continent’s average in the period 2005-09[4].
According to Martin and Simmons (2002)[5], beyond attracting investments, BITs provide a shortcut to policy credibility in the international arena.
According to a research conducted by Jennifer Tobin and Susan Rose-Ackerman Center for Law, Economics and Public Policy Yale Law School (2005), there may be nothing special about BITs and that there are other factors which drive FDIs other than BITs.
We will situate this debate in the context of the empirical data from Ghana, which is the second largest economy in West Africa, besides Nigeria.
As at 2016, Ghana had signed 27 BITs. However, only 7 were in force. Apart from China, the major sources of FDIs into Ghana are Singapore, Mauritius and Lebanon and yet there are no BITs between Ghana and these countries in force.
Interestingly, Ghana has a BIT with Mauritius which is not in force. Based on this data, I wish to conclude that in West Africa, BITs do not necessarily result in more FDIs.

In 2008, the Economic Community of West African States adopted a Supplementary Act on rules on investment and modalities for their implementation. The Supplementary Act contains very laudable clauses which if adopted and implemented by member States in the negotiations of their respective BITs will go a long way to cause BITs to have a direct impact on the socio-economic development of member states.
In this light, Nigeria has taken the lead across the sub-region by inculcating most of the provisions of the ECOWAS Supplementary Act in its most recent BITs with Singapore and Morocco which came into force in 2016.
We will proceed to discuss the way forward in bridging the gap between BITs and socio-economic development across the West African sub region.

Having made the above conclusion, it is the contention of the author that the Host States should be in a better position when negotiating the terms of a BIT in an effort to derive developmental benefits from such BITs. The Host States should ensure the inclusion of provisions which will have direct bearing on their socio-economic development.
We need no soothsayer to tell us what our socio-economic problems in West Africa are. We can list them as corruption, unemployment, environmental and sanitation issues, lack of local capacity and a host of others.
The author is of the humble opinion that BITs should be used as tools to facilitate socio-economic development. BITs should contain provisions which will ensure that the activities and operations of Investor States under BITs will have a direct bearing on the socio-economic problems across the sub-region. The author will suggest some of the provisions which should be included in BITs.

It will not be out of place for BITs to include provisions which will ensure that majority of management positions in companies controlled by Investor States/entities are citizens of the Host State. This will help in the fight against unemployment.

It is trite that some corruption scandals which have hit Host States involve citizens from Investor States. BITs should therefore include anti-corruption and anti-bribery provisions which will serve as a deterrent to investors offering to pay bribes to officials in the Host State.

There should be provisions in BITs which will insist that investors will enter into Technological Transfer Agreements to transfer the expertise to locals and ensure capacity building of the locals.

BITs should contain provisions which will prohibit investors from pursuing undertakings with adverse effects on the environment and sanitation of the Host State.

BITs should contain provisions which will insist on the exhaustion of local remedies for dispute resolution before any attempt is made to resolve the dispute outside the jurisdiction of the Host State. This will help build the capacity and experience of the judicial systems within the Host State to handle such investment disputes.

To conclude, it is the contention of the author that BITs per se do not guarantee socio-economic development unless they contain provisions which will have direct positive bearing on the socio-economic problems across the West African sub-region.
[1] Foreign Direct Investment and the Business Environment in Developing Countries: The Impact of Bilateral Investment Treaties: Jennifer Tobin and Susan Rose-Ackerman Center for Law, Economics and Public Policy Yale Law School (2005)
[2] UNCTAD 1998
[3] European Parliament Resolution of 6 April 2011 on the Future European International Investment Policy, preamble, paragraph G.
[4] Abdoul’ Ganiou Mijiyawa of the African Center for Economic Transformation (ACET), Accra, Ghana
[5] Martin, Lisa and Beth Simmons, 2002 “International Organisations and Institutions” Chapter 9, Handbook of International Relations. Sage Publications